We had some technical difficulties and this letter did not get sent to you in February. We felt this information was important for you to see.

In addition, because of COVID-19 causing many congregations to cancel their meetings we want to introduce our Facebook live video scheduled for Wednesday March 25 with updates from the Sea of Galilee, things happening here in Israel, and meditating on the Word of God.

Noam, from a religious Jewish background, saw our evangelistic videos and started spewing out curse words at us. But then something beautiful happened.

Noam (name changed for sensitivity reasons) grew up with a religious Jewish education and hated anything having to do with Jesus, Yeshua. When he saw our evangelistic videos on Facebook, he started cursing us publicly and in private messages.

But as we answered his objections (sometimes it was a test of patience!), slowly something started to happen. The curses were replaced with honest questions. The hostility was replaced with a genuine search.

Two years passed like this. Then suddenly, one day we received an order for a few New Testaments. Someone wrote that he wanted to give out some copies to friends, but since it's impossible to find them in bookstores in Israel, he asked us for them. God is able to overcome even the most intense religious opposition. So we called, and...it turns out it was Noam! Not only had his heart softened, but he had actually come to faith in Jesus, Yeshua, and wanted to share his new faith with his friends!

He told us that our videos and our conversations with him helped to understand who God really is. "I really appreciate what you're doing - it's wonderful work!"

What's beautiful about Yeshua is that there's always a place for forgiveness.

We were really touched to hear him say, "I want to apologize and say I used to be like many others and used to oppose you. I used to curse you on Facebook. I'm really sorry."

We responded, "What's beautiful about Yeshua is that there's always a place for forgiveness. We're brothers now." He continued, "I was searching all over, but now I've found the Truth and I'm certain of it. I'm really glad God showed me the Truth."

Please pray for Noam and many others like him from religious backgrounds who have come to faith but are facing major opposition from family and friends - that their faith would flourish, that they'd be bold to put Jesus, Yeshua, above everyone else, and that their witness would have an impact on their community.

Shalom! - Blessings and peace to you as we charge forward into a new year and a new decade. May we remember that it is the Lord who goes before us and guides our way.

As the year 2020 started, we were under a cloud of threats and rumors of war from Iran after the assassination of its terror leader, Qasem Soleimani, by the United States. Here in Northern Israel, our military was put on high alert and the citizens cautioned of potential terror attacks or retaliation from Iran and its Hezbollah backed forces.

While the Nation was on high alert we were given an unexpected gift, heavy rainstorms for ten days. The Land of Israel greatly needed these rains but one of the unfortunate results was a day of intense flooding in our city of Nahariyya.

In the Scriptures, rain in the Land is considered a blessing from God and we are the first to give praise to the Lord for this blessing. We recognize that all we have is from His hand and this is expressed well in Psalm 98.

Psalms 98:7-9
Let the sea roar, and the fullness thereof;
The world, and they that dwell therein;
Let the floods clap their hands;
Let the hills sing for joy together
Before Jehovah; for he cometh to judge the earth:
He will judge the world with righteousness,
And the peoples with equity. 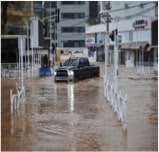 However, in the aftermath of the intense flooding considerable damage was done to Nahariyya and some of the surrounding communities. From people in our Or Hagalil Congregation we began to hear about those who were affected by the flooding and had their homes devastated. We began to think: how can we help
our neighbors?

Then in the nearby city of Acco, a local Congregation having contacts with aid organizations wanted to help us. As a result we received a group of aid workers from Tennessee, uniquely equipped for providing aid to flood victims. We are hoping that much help can be given to those families
in need and that a strong testimony of the love of the Messiah Yeshua will be extended to these people.

Jeannie and I are so grateful for having friends like you who stand with us united in prayer and support. We always want you to feel you are standing alongside of us as we serve the Lord in Western Galilee.