From all of us at Blessing Israeli Believers 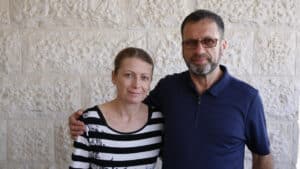 An Update from Aviv Ministry

Dear friends, today we would like to get you more closely acquainted with Eduard (manager of Aviv Center soup kitchen and leader of the work among new repatriates) and tell you how God called and prepared him to serve the Jewish immigrants and how through him the love of Christ touched many hearts.

Eduard was born and raised in Russia, and for a long time he heard nothing about Jews, except for the anti-Semitic idea that they were sly people who liked to profit from others. However, at the age of 19, he met his future wife, Victoria, who turned out to be Jewish. When Eduard had got to know her relatives and friends, he completely changed his mind about the Jewish people. He admired their values and their respect for family, work and national traditions.

Shortly after Eduard had become a believer in Christ, representatives of a Christian organization that helped Jews emigrate to Israel visited his church and offered him to join them. He hesitated at first, because, being a former drug addict, he thought about serving the addicted, but his pastor told him: "If even one of us serves the Jews, it will bring a great blessing to the whole church." Eduard also understood that the return of the Jews to Israel was actual fulfillment of Biblical prophecies, and decided to join this ministry.

Eduard’s task was to look for Jewish families, inform them of their right to return to Israel, help with paperwork and take them to the airport. Those who were not ready or could not emigrate received Eduard’s assistance with food and medicine, because it was a difficult time in the former USSR when many people lived in poverty. As a result of this ministry, over the next 8 years many Jews heard about Christ, dozens came to faith, and about 300 families left for Israel with Eduard’s help.

Eduard also built good relationships with Jewish communities, and especially with the one in his hometown. There were many lonely and elderly people in it, and Eduard and his believing friends helped them in every possible way. Initially, the Jews treated Eduard and his assistants with suspicion because they were Christians, but after some time, thanks to their good deeds, they won the trust and respect of the community.

In 2011, Eduard's family immigrated to Israel. Here he opened a rehab center for drug addicts almost right away, and later joined our Aviv Ministry. In addition to this work, he found families whom he once helped to immigrate to Israel and continued assisting them, while they started spreading the word about him among those who were just arriving in the country. Sometimes these new immigrants had no place to live, and Eduard would place them in his rehab center for short periods of time until a permanent housing could be found. Eduard also accompanied them to various authorities, helping them with documents and various bureaucratic issues. As a result, Eduard established very good connections with the city administration. As it turned out, all that was preparation for something bigger. In February this year, the war in Ukraine began, as well as the big wave of immigration to Israel from Ukraine and Russia. Israel tried very hard to accommodate and provide the newcomers with everything they needed, but they still faced bureaucracy and many other difficulties. In addition, most of them left their homes in a hurry, with almost nothing but a couple of bags.

Today, Eduard (besides his work in our Aviv Center and in his rehab), using all his years of experience and all his connections, serves the new immigrants with great love and often literally from sunrise to sunset. He helps them with documents, finding work and housing, with groceries, second hand clothes and furniture, etc. He wants to show them in every possible way that they are welcome in Israel, and arranges picnics, trips and other events for them. Thanks to all that, Eduard builds very good and close relationships with them and can naturally, both in word and deed, share the Gospel with many non-believing Jewish families. Please keep praying for Eduard, his team and all the immigrants he is in touch with, and please support this project if God puts it on your heart!

Also please keep interceding for all our workers and volunteers, for the visitors of Aviv Center and for all the residents of our Men's Rehab and of the Women's Shelter.

Thank you for your support and prayers that help us keep our projects going and growing!

Yours in the Lord, 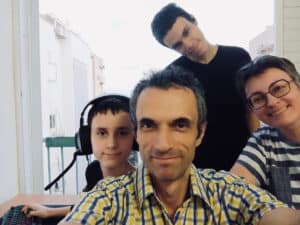 Praise the Lord as many Jewish people from the Ukraine and Russia have immigrated either before or during the present war between their Countries.

Another one of these families is from Russia and has served the LORD for many years. Through Blessing Israeli Believers we were able to bless them with a financial gift to purchase furniture and household items.

They have asked us to convey their thankfulness and have asked for your prayer especially for their children that are suffering from a serious genetic disease.

Thank you for your continued prayers and support for Blessing Israeli Believers! Your generous gifts make it so we are able to participate in the work the Lord is doing!

In His Service, Dov Schwarz

The Gospel Truth About the Rapture

For a donation of any amount! Please be sure to note "Rapture Book" in memo/note section of check or MO or in comment section for online donations.

Also find us on social media: