Once again it is Passover/Unleavened Bread season (April 15-23). And we thought it most appropriate to remind our precious BIB partners of the Blood of the Lamb Messiah Yeshua. We are praying many Passover blessings upon you.

The First Passover
Having rejected the word from the LORD to let the children of Israel go from Egyptian bondage—Pharaoh experienced nine great plagues of devastating wrath upon his land and people. The tenth and final plague was on its way, which is where we pick up in Exodus…

Please notice: a pure and spotless lamb, kept four days, kill and eat the lamb with unleavened bread, “when I see the blood, I will passover you”, strike the wooden doorposts with the blood of the lamb. 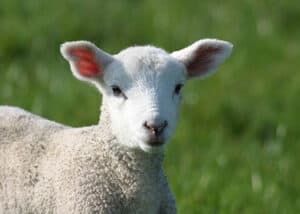 “Now the Lord spoke to Moses and Aaron in the land of Egypt, saying, “This month shall be your beginning of months; it shall be the first month of the year to you. Speak to all the congregation of Israel, saying: ‘On the tenth of this month every man shall take for himself a lamb, according to the house of his father, a lamb for a household. (Exodus 12:1-3)

“Now you shall keep it until the fourteenth day of the same month. Then the whole assembly of the congregation of Israel shall kill it at twilight. And they shall take some of the blood and put it on the two doorposts
and on the lintel of the houses where they eat it.
Then they shall eat the flesh on that night; roasted in fire, with unleavened bread and with bitter herbs they shall eat it.” (Exodus 12:6-8)
“Now the blood shall be a sign for you on the houses where you are. And when I see the blood, I will pass over you; and the plague shall not be on you to destroy you when I strike the land of Egypt.” (Exodus 12:13) 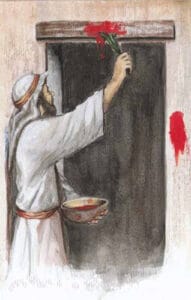 Certainly, the LORD did deliver the children of Israel from bondage. Later, in the New Covenant Scriptures we see the fulfillment of these things in the Lamb of God whom John the Baptist speaks of in the gospel according to the Apostle John:

The next day John saw Jesus coming toward him, and said, “Behold! The Lamb of God who takes away the sin of the world! (John 1:29)

Four days before Passover the spotless/sinless Lamb of God comes down the Mount of Olives into Jerusalem on a white donkey. And, during that four days the religious leaders accuse and attempt to entrap the Lamb of God in His words—but they can’t because He truly is God the Son—the only begotten Son of God—the Passover Lamb!

Since the Exodus and up to today, the children of Israel in the Land and the diaspora in the nations remember that first Passover evening with a special Passover evening meal and telling of the LORD’s mighty hand in deliverance. It is called a Passover Seder. We see the most important Seder ever in Matthew 26.

“And as they were eating, Jesus took bread, blessed and broke it, and gave it to the disciples and said, “Take, eat; this is My body." Then He took the cup, and gave thanks, and gave it to them, saying, “Drink from it, all of you. For this is My blood of the new covenant, which is shed for many for the
remission of sins.” (Matthew 26:26-28) 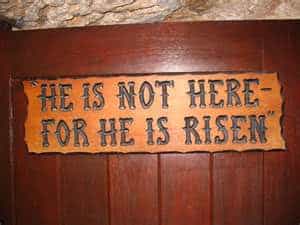 In that Passover season while lambs were being slaughtered in the Jerusalem Temple—the Lamb of God laid His beaten/broken body down upon the wooden cross. They then struck the wooden cross with the blood of the Lamb! And, the blood of the sinless Lamb spilled down that cross to pay for every time we have broken God’s laws. But, I have some very good news: Hallelujah—on the third day King Messiah Yeshua rose from the grave—and He is alive! And, He is alive in me—is He alive in you?

But as many as received Him, to them He gave the right to become children
of God, to those who believe in His name: who were born, not of blood,
nor of the will of the flesh, nor of the will of man, but of God.
(John 1:12-13)

In this most special Passover season—may we be thankful and rejoicing that God’s wrath has passed over us. And please do also remember our Israeli Believing partners in the Promised Land during this special season. May your special love for our Savior be reflected by your love for His chosen people in the Holy Land.