“In Him was life, and the life was the light of men.
And the light shines in the darkness,
and the darkness did not comprehend it.” John 1:4-5

This time of the year is so special! Not only is the air filled with the sweet scent of sufganiyot (donuts), but the nights are full of light. During Hanukkah, families light the candles together, and then place the Hanukkiah in their windows so the light is seen. One of the reasons for this is to share the light with all who pass by. We see this echoed in Yeshua’s words. He said:

“You are the light of the world. Let your light so shine before men, that they may see your good works and glorify your Father in heaven.” Matthew 5:14-16

Yeshua came from the Father, as the Light of the world, and called us to be as He is. As the Body of Messiah we celebrate the arrival of this Light into the world. We remember the miracles that He has done for His people and for each of us individually. As we are drawn together gazing upon Yeshua and His light, we shine together into the uncomprehending darkness declaring with all that is in us “in Your light we see light.”

With much love, Oded & Sandy

Thank you for your prayers for the new evangelistic street interviews - our last outing was quite amazing!

We set up a sign saying “Does God exist? If so, who is He? Let’s talk!” in a very public area. Not only did we get some great interviews on camera, but our team had numerous conversations about the Lord with many others who came by. But it wasn’t without opposition. In the middle of the first interview, a man who was listening in started to get very upset, then started cursing viciously and threatened to kill all of us! Surely the enemy of our souls wasn’t happy with the Gospel spreading on the streets of Israel!

A Muslim man, Ibrahim, talked with us next. When we asked for proof that Islam is true, he couldn’t give any,
and after a while, he admitted on camera that the Muslim way of salvation by good works that cancel your need for a punishment is neither just nor logical. We then shared the whole Gospel with him!

When we asked our final interviewee, a lawyer, if she believes God exists, she said, “I believe it’s not all by coincidence,” but she wasn’t sure if God exists or if the Bible is true. So we talked about how the Tanakh (Old
Testament) had prophesied 2,700 years ahead of time how the people of Israel would be scattered then regathered to their land, how they’d reestablish their nation, revive the Hebrew language, be attacked by many nations yet still survive, etc. We said, “Did you ever consider that if everything isn’t a coincidence, the opposite of “coincidence” is “planned”? Wouldn’t that mean there’s Someone who planned it all?”

She was very open, and after sharing how Yeshua fulfilled the Messianic prophecies, died for our sins, then rose again, she asked with genuine interest, “So Yeshua’s the Messiah?” She later said of Him, “He’s a wonderful person.” We gave her a New Testament at the end of the interview!

For most of the last 2,000 years, the vast majority of Jewish people have strongly rejected Yeshua and been unwilling to even consider His Messiahship. For a Jewish lawyer to show such genuine interest in Yeshua on camera is a testimony to how God is answering your prayers and bringing us closer to the day when “All Israel will be saved” (Romans 11:26)! Hallelujah!

Many blessings in Messiah!
Ariel & Shayla 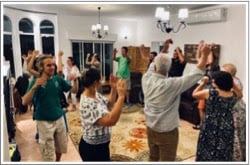 Thank you for supporting the ministry to the Holocaust Survivors. Many have come to faith but there are still some who need to have their names written in the Book of Life.

Israel has finally opened its border to individual tourists after being closed for 20 months. Please pray the borders would remain open and we would hold our Spring 2022 Program.

Pray for the meetings to the young Israeli adults, that they would be equipped for the ministry. Truly the harvest is plentiful and the laborers are few.

We are also encouraged and excited in all the new Bible Studies here in the Golan Heights and Galilee. Our Congregation continues to hold our 5 weekly Bible studies plus a new meeting that has started in our home. This meeting is for young soldiers (security no pics) and those who have finished their military service. They join our family for dinner then we have a Bible study where we are seeking to teach them how to study the Bible, followed with Bible trivia games.

Our new work in the Galilee is up to 40 people in attendance. I am also one of 5 elders that teach a men’s study on rotation near the Lebanese border and was blessed to teach Malachi 2:10-17

All for His Name’s Sake, Ezra & Shulamite