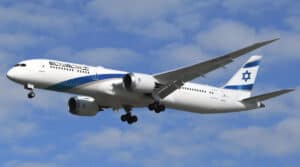 Recently, my wife and I were scheduled to return to Israel from a visit to the United States. After two flight cancellations prayerfully and thankfully we were able to get re-booked on EL AL—the Israeli airlines. Due to the threat of Hamas rockets, our flight was re-routed to a smaller airport in the southern desert of Israel. Once there, we waited patiently on the tarmac, refueled and then were given clearance to fly and land at Ben Gurion Airport near Tel Aviv.

Why did all this happen? It is due to the fact that prophetic Scriptures are leaping off the pages of the Bible! Hamas and other Palestinian terrorists, Hezbollah, Iran, Turkey, and others are incensed over Jerusalem. The world is fast approaching the final prophetic scenarios including ours great King and Savior returning to His holy city Jerusalem. Keep watching—the nations will increasingly go mad over Jerusalem. Hallelujah, we know the end of the book—WE WIN!

“Behold, I will make Jerusalem a cup of drunkenness to all the surrounding peoples, when they lay siege against Judah and Jerusalem. And it shall happen in that day that I will make Jerusalem a very heavy stone for all peoples; all who would heave it away will surely be cut in pieces, though all nations of the earth are gathered against it.” (Zechariah 12:2-3) 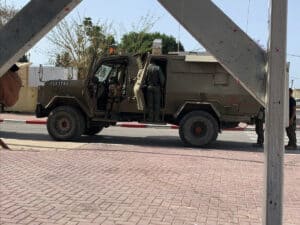 So Just what exactly do you do when you feel the Lord calls you out someplace, and your car is loaded down full of cold drinks, snacks and cookies and the news report talks of tension in the area?...WELL….
You GO.

Little did I realize when I was invited to a group of undercover soldiers in the IDF that I would be down on the border with Gaza the same day that Rockets would start flying over my head. I knew there was a lot of tension in the air, I mean there usually is…. this is Israel. This is where I live and this is the land of the people God has cut covenant with.

We have quite a few neighbors that are not happy with us… for their own reasons. But this is the beauty of the Gospel of Messiah. "He died in order to break down that middle wall of separation, having abolished in His flesh the enmity….so as to create in Himself one new man from the two, thus making peace.” (Ephesians 2:14) 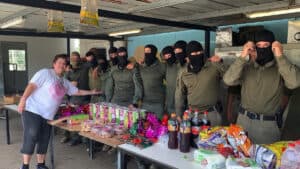 So in the midst of chaos and upheaval and true enmity happening in the land, you go out and you share the Good News of a God who loves and cares for each one, and especially for our IDF Soldiers and a God who wants peace as much as these young men and women want it.

This wonderful unit that I visited were so happy that I came down south, a two-hour plus drive. In the beginning I was to meet them on the Egyptian border but then everything changed to the Gaza border. A group of about 80 guys, serving in the army, for some of them its a career, they have chosen this, but they need to be reminded that God has called them and watches over them in their missions during the day and in their excursions at night. As they go in-and-out to very real dangerous areas they put their lives on the line so that we could sleep comfortably.

It's amazing that as you pass out cakes and cookies, the love of a mighty God can be so very tangible and real. As the dusty wind blows through my hair and the sand whips up around me, I’m hot and dirty and probably a bit sweaty, but we all are like that as we sit out in the sun and the heat. These young men (& one woman) all get hugs and pats on the back, a little bit of talking and asking about them and their lives, gives them a break, a very short one, from the real dangers at hand.

We ended up passing out Ima’s Goodies to several hundred soldiers that day down along the Gaza border. Scripture talks about a cup of cold water given in His name, that was the perfect thing for back in Jesus’ day, but I'd like to think that today as we give some cold Coca Cola and some snacks, we share the love of ALMIGHTY God and each time a muffin or Cookie is given the Good News goes forth.

Thank you for your love, prayers and support for this ministry.

We Bless You from the Kitchen of Ima’s Goodies,

Dear friends of Blessing Israeli Believers, Recently we found out that Gidon is in need of new hearing aids and glasses. Gidon was diagnosed with Parkinson’s a few years back, his situation has gotten better with the help of some new medicine, however he is unable to work. Gidon and Renee’ have been serving the body of Messiah in the Land for almost 40 years and the family is in need of assistance. Please ask the Lord if this is something you could be involved in helping.