A Note From Co-Founder Dov Schwarz
Israeli Believers and Their Miraculous End Of This Age Witness!

Here am I and the children whom the Lord has given me!
We are for signs and wonders in Israel
From the Lord of hosts,
Who dwells in Mount Zion. Isaiah 8:18

The Lord of Hosts means that Messiah Yeshua is the Military Leader of the armies of heaven. One of His designated battle strategies is to raise up His followers at the end of this age who follow Him against all odds. They are walking, talking sign-posts and uniquely cause Israel to defy the laws of nature (wonders)!

You see, so many people acknowledge how Israel defies all the overwhelming military, numerical, political, and historical odds against them. That is why David Ben Gurion, who was not necessarily religious said "In Israel, in order to be a realist you must believe in miracles." Also, at West Point Military Academy as they study and teach military doctrine, they study past wars to implement winning strategies. While they learn from great military strategists and battles, they refuse to consider the wars won by modern Israel.

Do you know why? It is because there is no practical or conventional military reason that Israel has not been wiped out by their enemies in these wars! Their victories are simply not replicable by human planning! Yet, the Bible tells us the conduit through which Messiah Yeshua provides these and other miracles in Israel:

And as Isaiah said before:
"Unless the Lord of Sabaoth (Hosts) had left us a seed,
We would have become like Sodom,
And we would have been made like Gomorrah." Romans 9:29

The same Lord of Hosts Isaiah spoke of is the Lord Yeshua who has raised up a seed of righteousness-about 30,000 (thirty thousand) Israeli Believers out of about 6,000,000 (six million) unbelieving Israeli Jewish people. Through this seed of the righteousness of Messiah Yeshua signs and wonders are taking place in Israel today. They shout to the earth's inhabitants that judgment is coming as Israel's, and the Nation's, Judge and King is about to return. So remember, one of the best ways to bless Israel is to Bless Israeli Believers in Messiah Yeshua!

Update from Ariel & Shayla, Haifa Israel:
Our largest street outreach so far, and many breakthroughs! 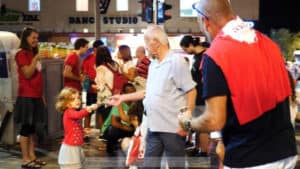 After inviting pastors and evangelists from all across Haifa to a joint breakfast in order to encourage more unity in evangelism, we saw quite a few respond by coming and sending people to this outreach. During one of the three outreaches, we had over 60 believers come to share the Gospel and pray - far more than we've had for any street outreach event so far! There was beautiful unity between Jews, Arabs, and other believers from many backgrounds.

We passed out lemonade, coffee, and balloon animals, did face- painting and portraits, and had music playing, and explained, "It's all for free - just like God's love." We also had a "Wall of Gratitude" where we invited people to write down something they're grateful for. All this opened up hundreds of conversations where we got to share about Yeshua and the Gospel.

We saw Itzik, a man we'd shared the Gospel with about a year ago, but who was very hard-hearted and proud. But this time as he saw us showing God's love together, he was much more open.

He said that he puts on Tefillin (also called phylacteries; the black leather boxes with Scripture inside worn by Orthodox Jews during prayers). He claimed that it is like putting on part of God's clothing and said he feels a connection with God and feels good during those 15 minutes every day. Kamal and I were speaking with him, and Kamal said, "I feel that way every day, all day! And you know what? I used to be Muslim...." He then shared his testimony of going from emptiness and drugs to abundant life in Yeshua.

I then added, "You know what part of God's clothing you really need? It's called a 'robe of righteousness'" [see Isaiah 61:10]. I then explained in depth how we can obtain Yeshua's righteousness because He lived a perfect life and then took all our sins upon Him and offers us His righteousness if we will repent and believe in Him.

With much appreciation and love in Yeshua, Ariel and Shayla and the Team