Please be inspired and encouraged with updates from our partners in the land.

From Beit Tfliah, House of Prayer: 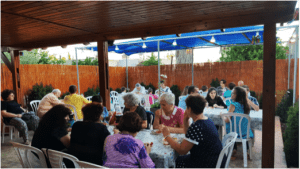 Acts 2:42
It was a blessing to gather together to celebrate the Feast of Shavuot (Booths) for the first time in our newly completed outdoor fellowship area. Our gazebo project is finally completed with lighting, as well as fully landscaped, thank you CC Rocky Mountain. We are pleased that God brought non- believers to join us as we had prayed and envisioned to share the love of Messiah, and His word.

Presently we are moving cabinets to enlarge our fellowship area and give us more storage in our kitchen. Please pray that God will give us the ability to complete this and all our projects as we personally do all the labor required to keep costs to a minimal.

The Fellowship itself is doing well with numerous people functioning, which is causing growth of the whole body. As we continue to speak the truth in love people will grow in all things in Him. Please keep us in your thoughts and prayers and may our LORD's face continue to shine upon you. 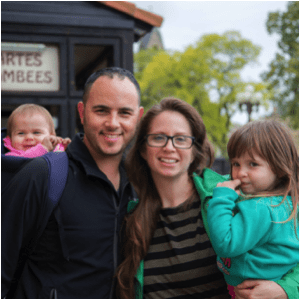 Through your generous gifts we were able to assist a young Israeli family returning to Israel after studying at a Bible College abroad. Upon their return they secured employment but lacked the funds to pay their first months rent. They have asked us to convey their thankfulness for you standing in the gap on their behalf. 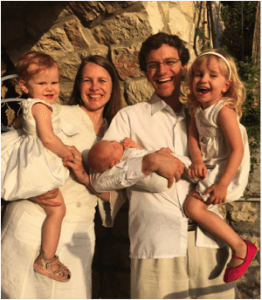 About a year ago, God started stirring our hearts to seek Him more for divine healing here in Israel.

I've been intensely studying the hundreds of Scriptures related to healing, reading several books about it, and watching dozens of testimonies of people healed and of those being used by God to heal others on the streets.

By God's grace, during that time we've seen and heard of several healings, especially through ministries of the congregation. But we've also been praying intensely for Yeshua to use us and others to heal people on the streets just like He and His first disciples did.

Then, a couple of months ago, I had a dream that I would pray for someone with a crutch and a significant problem in their leg, that Yeshua would heal them, and it would be a breakthrough in this area. Since then, if I saw anyone with a crutch, they had to hear the Gospel and be prayed for in Yeshua's name! 🙂 Praise God that quite a few people heard the Gospel as a result of this, but I hadn't seen any immediate healings...until a few days ago.

I was on a bus and felt the Holy Spirit leading me to sit next to an older lady and only afterwards noticed she had a crutch. I started a friendly conversation with Sophie, then shared my testimony about how I had crutches after my Achilles heel was torn and was supposed to take months or even years to heal, but after someone prayed for me in Yeshua's name, it was healed and I could instantly run again.

So I offered to pray for her, and she said, "But Yeshua can't heal what I have. The bones in my knee are broken and I have other serious problems, and I already had a surgery that failed and now I have to replace my whole knee."

I explained that Yeshua has healed things that were even worse than that, but then she said, "But people from Chabad [an Orthodox Jewish movement] and many other places have already prayed for me, and nothing worked." I asked her if anyone prayed for her in Yeshua's name, and she said they hadn't. So I said, "So can I pray for you now?" And she agreed. 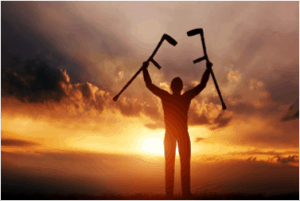 I asked her if she had pain at that moment, and she said that it was hurting badly right then. Then I prayed in Yeshua's name, and immediately asked her, "Now how do you feel?" She looked at me with total shock in her eyes and said, "Maybe it's just psychological, but I don't feel pain!" I told her, "It's not psychological - Yeshua really heals!

Please pray with us for more healings and miracles in Yeshua's name! 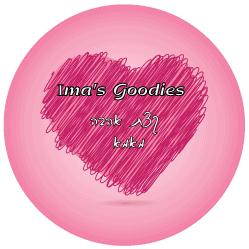 We would like to introduce to you a wonderful group that is ministering to the Israeli Defense Force soldiers ~ Ima's Goodies. "Ima" is the Hebrew word for "Mother". Who doesn't appreciate the treats a mother or grandmother would bake for her children or grandchildren!? Here's a bit of background:

On June 12th 2014 three teenage Jewish boys were kidnapped and murdered in the city of Hebron. During this time there were constant missile attacks on the residents of the South of Israel, and as a result of our IDF forces searching for these three young men, many underground tunnel systems were found leading from Gaza to within Israel's border. Our government and IDF forces went on full alert to try and stop the barrage of rockets. Over 75,000 reservists were called up for duty. It was during this time frame of "Operation Protective Edge" that Ima's Goodies was started as we wanted to do our part as well. We thought it was so important for the soldiers to know that believers living here in the land as well as Christians from around the world love and support them. 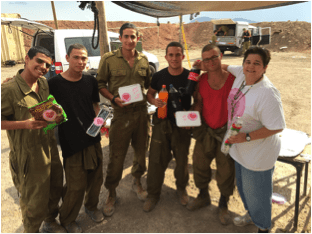 So I picked up my mixing bowl and my supplies and went to work.

Ima's Goodies was founded by Renee Shmuel. Its mission is to lift the soldier's spirits and meet the evolving needs of our Active Duty and Reserve soldiers. In July of 2014, she came up with the brilliant idea of bringing snacks to Israeli soldiers who were fighting around the clock to defend their nation. As you may realize, soldiers are not treated well in the food department. She took her own initiative and began baking cakes and other delicious sweets for IDF troops, to whom she personally delivered on a weekly basis. She appreciates all the support she can get: financial, emotional, physical and prayer. She started this organization with the goal of showing the Israel Defense Force that many people, including non-Israeli, non-Jewish people support the nation of Israel. 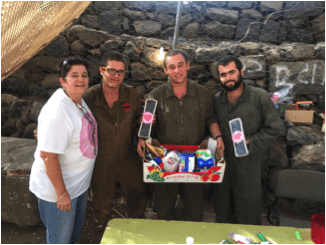 Our mission is to show the soldiers of the Israel Defense Force that we are true Christians and Jews that support, love and pray for them. We are a group made up of many different cultures, peoples of all races, ethnicities and ideals, but united in our love for Israel.

ARRIVAL: Sometimes I pull up to the base and once again I need to try and
explain who we are and what we doing here, sometimes it's in the middle of no-where. It's hard to believe that there could be places like this in our small country. I imagine the young man at the front gate on duty wonders how I managed to get there, but after I assure them that I came looking just for them, they are excited to see what kind of 'goodies" we have for them. They are always surprised that we would show up and pass off some 'lovin-from-the-oven' to them. Thank You for giving and helping us with this to support our soldiers. 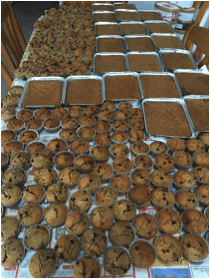 BAKING: We bake all of our cakes in my little kitchen at my home, some days working from early morning to late at night trying to get as many as 60 cakes baked during one day. We then wrap them up with lots of love and eagerly I await to see who all I will meet in my next outing. In the wintertime the soldiers like when I bake the cakes in the little metal pans, so they can put them on top of their radiator heaters and warm them up before eating, You might ask what is their favorite cake? Banana Chocolate Chip Cake. I even have had a few wanting the recipe, maybe some day I'll post it. It's actually quite easy, just load it up with Chocolate, Banana's and LOVE. 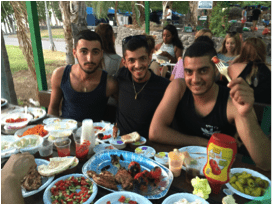 RANK of COMMANDER...I have NO IDEA of all the ranks in this army. I never know if I am speaking to a foot soldier or a commander. One time this young man at the front gate, when I asked him to call the commander to ask permission to pass out goodies to the guys. He looked at me and then looked at his shoulder where his rank was posted.

I, of course, had no idea what was going on and completely missed the whole thing! I am so glad that I treat them all with the respect they deserve. Each soldier that I meet has put their life on hold to 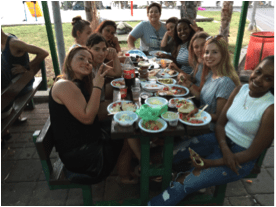 specifically answer the call oftheir nation of Israel at this time, whether it's for a few years or a bit longer. To know that I can sleep in my bed at night, free of thoughts or worry towards the enemy because THEY are on duty. Somehow in the midst of all that they go through they give new meaning to the words, 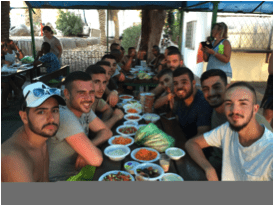 Blessing Israel Believers recently participated with Ima's Goodies in providing for a BBQ for the soldiers:

We here at Ima's Goodies just want to say a BIG thank you to "Blessing Israeli Believers" for their love gift towards a BBQ that was held for our Israeli Defense Forces. A large Unit from the Magav- Border Patrol Police, were able to participate in a few days rest from the daily activity of helping to maintain order here in the land and Ima's Goodies was able to come alongside of them and give them a wonderful BBQ as a way to thank them for their service. Thank you for giving and blessing our soldiers, Renee Shmuel ~ Ima's Goodies